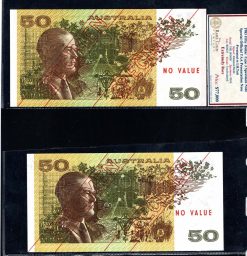 Historical Notation: In 1983 the Governor of the Reserve Bank of Australia presented special awards to ten TAA employees who assisted in preventing the theft of banknotes in 1982.

The thief was known as Mr Brown*, through various phone calls to authorities, he made claims of potential damage. Mr Brown spent some time behind bars.

This banknote was given to IH Tait in appreciation. Among other ground crew.

This banknote alone makes it rare although not unique.