Welcome to our Newsletter for June 2016 from Australia’s leading International online Numismatic Dealer @ www.therightnote.com.au. This is my personal overview on the introduction of all new designs of Australian currency. The Right Note have established our international credentials over 21 years, with an available online audience, that has placed TRN in our current dominant International market position.

From an investor and collector point of view Australian banknotes are undergoing the most exciting change of Australian currency in living memory.

This is an opportunity that will never be repeated for both Collectors & Investors alike, interested in Australian Currency history, the question is WHY?

With the introduction of the Five Dollar banknote in September 2016, the new design featuring on the obverse side Queen Elizabeth II to the right side, to the left are the joint signatures of Stevens/Fraser. Mr G. Stevens. Governor of the Reserve Bank of Australia with Mr John Fraser. The Secretary to the Treasury. 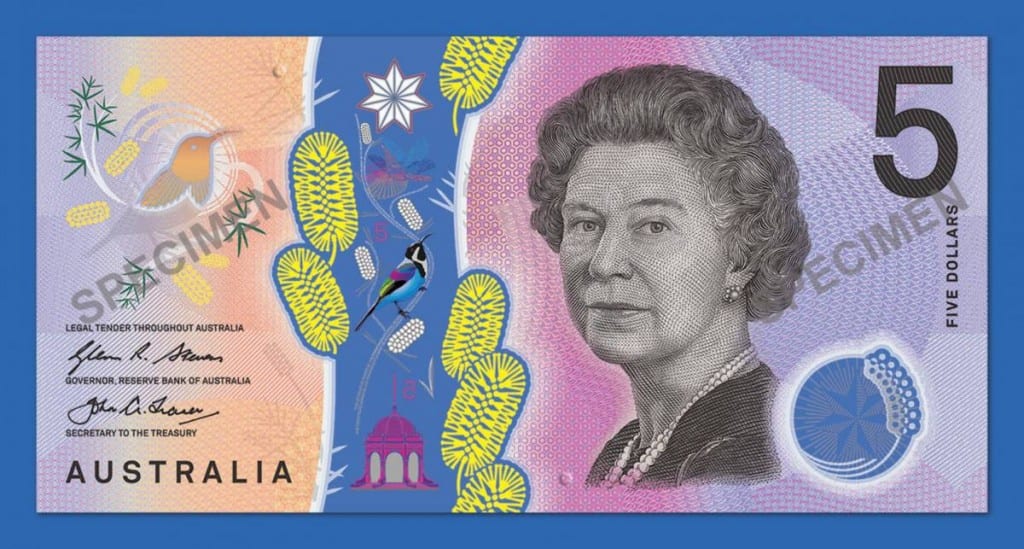 The Reserve Bank of Australia have introduced two (2) security devices known internationally as Optical Variation Device for security purposes. One OVD is on a vertical plane, the other OVD is on the bottom left of the obverse side, these dual security features will assist in establishing Australian banknotes to a higher level of anti-counterfeiting, which although counterfeit banknotes up to this time, represent a very small proportion of all banknotes in circulation. These security devices will ensure counterfeit banknotes are less of a problem for government authorities. 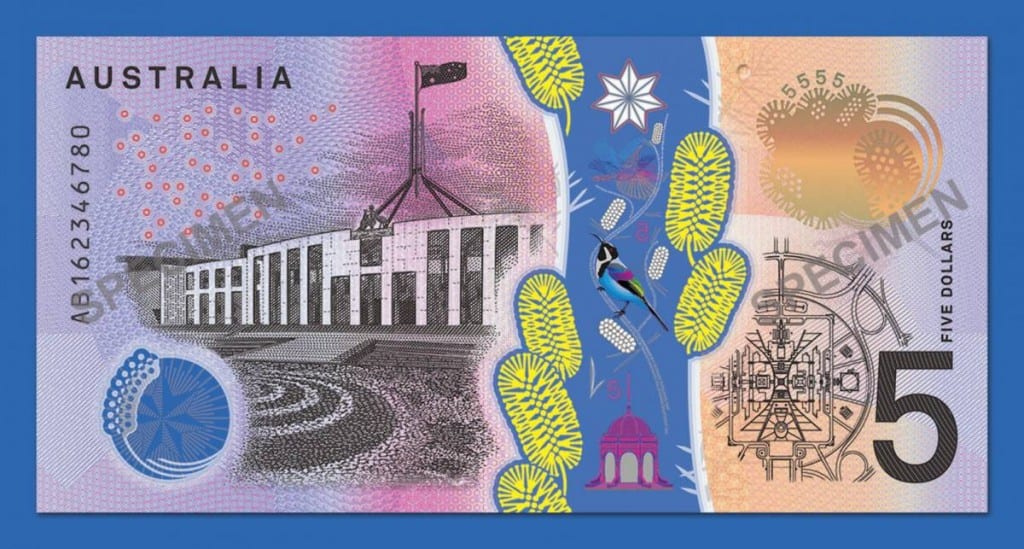 The new designs of all Australian currency have been many years in the planning stage, via The Reserve Bank of Australia, the Five Dollar being the first in the pipeline to be released in September 2016. Although the merits of Dr Fred Hollows appearing on our first new Five Dollar were many fold, this was never going to be a practical design option.

The obverse side of our first Five Dollar and the reverse side would always include Queen Elizabeth II, the reverse being the seat of Government in Canberra, as test marketing had begun on both the Five and Ten Dollar some years before their introduction in 2016.

A nation’s currency is an insight into our history, how we feel about ourselves, why do we redesign our currency?

Change is brought about by necessity, as technology has changed from Australia introducing Polymer banknotes in 1988, so does the reason and purpose for change, not for it’s own sake. Australian technology with the invention of polymer substrate material’s in the 1970’s through a joint venture led by the CSIRO, created a world first of Polymer Substrate Materials (PSM).

This technology was sighted by Note Printing Australia Pty Ltd, an operating subsidiary of The Reserve Bank of Australia. This led to a joint partnership being formed between the CSIRO & NPA to create the world’s first polymer banknotes, being released for Australia’s BICENTENARY of 1988. It is generally accepted in all quarters of the International numismatics community, this Ten Dollar with the signatures of Johnston/Fraser was the most creative, and best designed of all banknotes of that era.

Unfortunately, this beautifully designed banknote, failed one fundamental test, The Optical Variance Device (OVD). Being the major security device, as opposed to all pre decimal & decimal banknotes which featured clear watermarks visible from both obverse & reverse sides, making counterfeiting almost impossible, unless the artist was prepared to hand draw, and cut to size.

The Ten Dollar 1988 Johnston/Fraser Bicentennial banknote failed the most important test of circulation. The only security feature of this banknote was the OVD, placed to right upper side on the obverse side, and clearly visible on the reverse side. Captain James Cook featured on this OVD.

The intention of this polymer substrate material (PSM) for this release in 1988 was to ensure clear identification by individual banks, and their staff and the general public, this system worked well as banknotes were sent to Australian bank’s for clearance, reducing their potential damage. ATM’s were introduced to Australia in 1977 thereby running these banknotes through this technology created a severe rejection of all first issues of the banknote. The OVD simply “rubbed off”. The finished OVD of this first issue had only a smooth, thin varnish placed over the OVD. This led to a total recall of all first issue banknotes, completed very discreetly by The Reserve Bank of Australia.

The second issue of the this same banknote featured a thicker veneer finish, which successfully stood the test of time, until the introduction of the Ten Dollar Fraser/Evans in 1993 which is the same banknote that is in circulation today.

The new Ten Dollar under the signatures of Stevens/Fraser will incorporate the same security devices as The Five Dollar. The planned release of the Ten Dollar is in 2016. Ushering in our New Era of Australian Currency.

The balance of the Twenty, Fifty and One Hundred Dollar will be released in 2017

The Reserve Bank of Australia should be congratulated, for their new and creative design including all updated security devices to be included in the rollout of all Australian currency.

From an investor and collector point of view Australian banknotes are undergoing the most exciting change of our currency in living memory. This is an opportunity that will never be repeated for both Collectors & Investors alike, interested in Australian Currency history, the question is WHY?

Now is the time for Australian collectors & investors of Australian currency, to plan a strategy based around the introduction of our redesigned banknotes in 2016-2017? I now speak of all previous issues from 1988 up to and including all denominations. Annual capital growth of Polymer banknotes has been steady and reliable over the years. We have seen no dramatic price variance, the “highs and the lows” experienced in other areas of banknote investing and collecting over the last ten years. This market is stable and predictable.

Numismatic enthusiasts who have or will be collecting, in this potentially rich area of investing, need only take stock from average prices of Australian paper banknotes being phased out from 1982 in favor of polymer banknotes, prices have increased at a mean average per annum of 4% although a great return over 50 years, investment potential lies within a safe and predictable area of numismatic investment.

Alternatively for those that have collected polymer banknotes from 1988 a different investment equation emerges, average annual capital returns far exceed that of paper banknotes when we first speak of polymer banknotes. With the introduction of new currency, the old currency in turn becomes far more valuable, if past performance is a predictor of future performance, in this instance it is. Your strategy needs to include purchasing key banknotes from 1988 to 2006 (banknotes after this date are still awaiting accurate annual capital return).

As time goes by, our predictor scale is that all banknotes within this time period will increase by upwards of 30%, independent of catalogue prices, these catalogues have not taken into account, the introduction of our new Australian currency.