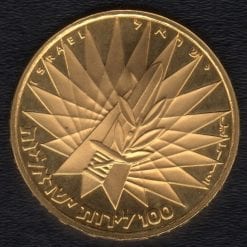 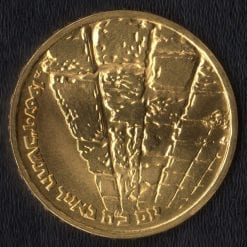 Direct deposit only on Gold Coins.

Coin Description: A Proof FDC Fleur De Coin in a grade of PR 67 TRN estmation. The gold weight is 22 carat. With your purchase will come letters of provenance as made available to TRN.

The Victory Coin was issued to mark the victory of the Israel Defense Forces in the Six Day War, June 5-11, 1967.
“Those were days of awesome splendor,” said Prime Minister Levi Eshkol to the Knesset on June 2, 1967. “Our nation will remember them for generations. They were days to uplift man and his spirit, the entire nation was marshaled to fight for its life and hopes. Everyman knew his duty; he carried out his assignment; attended to his post. Thus, victory was ours I”

In the center, the emblem of the Israel Defense Forces, against a stylized star. Around the upper border, between the rays of the star, the word “Israel” in Arabic, Hebrew and English. Around the lower border, the face value”10 Israeli Lirot” in Hebrew on the silver coins, on the gold coin “100 Israeli Lirot”.

The Western Wall. Around the lower border, to the right,  the date of its restoration to Jewish worship, in Hebrew “28th day of lyar 5727” and “1967” in English.

On the proof silver and gold coins, the Hebrew letter “mem”. On the lower border to the left “1967”.