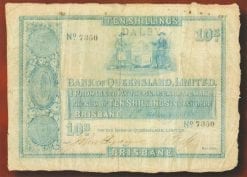 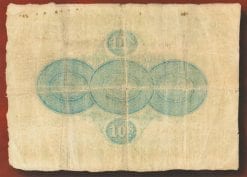 When the First Fleet arrived in Australia in 1788, no provision had been made to supply the colony with a currency of any form. The only means of trade was a barter system which was difficult to keep under control and eventually threatened the survival of the NSW colony. As such, one of Governor Macquarie’s first priorities was to set about establishing a people’s bank, the ‘Bank of New South Wales’ which was established in 1817. The influx of immigrants coming to Australia seeking fortune with the discovery of gold in the mid 1850’s brought about a boom of private banks throughout the settlements. The newly established banks introduced their own legal tender paper notes, many of which were large and elaborately engraved to discourage forgery. Prior to the financial crash of 1889 and the subsequent foreclosure of many banks, these splendid banknotes were widely used and traded throughout the colonies.

This 1866 Bank of Queensland Issued Ten Shilling Note is one of the finest and rarest examples in its category.