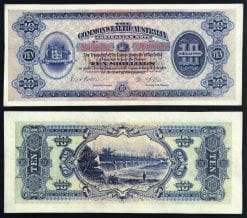 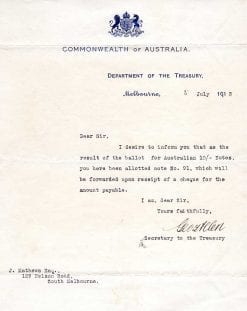 Accompanied with original letter from G.T. Allen, Governor of the Commonwealth Bank

This 1913 Collins/Allen Ten Shilling note is of major numismatic importance having been the first Ten Shilling note issued anywhere in the world. It is also one of the first 500 notes printed which were specially allocated by ballot to Parliamentarians and high ranking officials who paid for the privilege of owning one of first notes printed on this historic occasion.

1913 became the official commencement of the introduction of Australia’s first legal tender paper currency and a much awaited issue after Federation in 1901. The Ten Shilling note heralded a new era in an all Australian currency and played a significant part in the evolution of our historically diverse currency system. As such, the few surviving 1913 issues, have today become so notoriously rare, they are seldom seen and command ever increasing prices when offered for private sale.

The first 500 notes printed in the Ten Shilling series such as this fine example, are of particular numismatic importance as each of the allocated notes were distributed with an accompanying letter signed by the Secretary to the Treasury, George T. Allen and dated 5th July 1913.

The personal hand signature of the then Prime Minister Andrew Fisher appears on the back of this Ten Shilling note, serially numbered M000091, indicating this example may have been in his possession for a time. His signature, although barely discernable, has been officially authenticated, adding significant distinction to this superior banknote rarity.

For the historically minded and those with a passion for rare excellence, there are few opportunities which can compare with a banknote acquisition of this stature.

All sale inquiries can be directed to The Managing Director, Mr Richard E. Fahy. Call +61 2 9251 1288 or Email richardfahy@therightnote.com.au