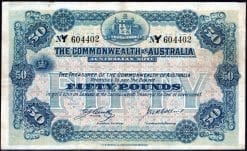 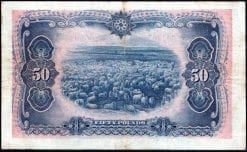 In the grade of Very Fine. All paperwork supplied to our Vendor by KJC including the provenance and grading is available on request. Although limited in scope it does specify a grade a Very Fine

Place more importance on the extreme rarity of the banknote.

$87,000.00. Or Manage Offers. All serious purchasers can make an offer. You have had this banknote graded by two(2) of Australia’s leading independent numismatic dealers. The Right Note and Kurt Jaggard Coins. A better reference of grade could not be obtained.

Of all the higher denomination pre-decimal banknotes produced by the Commonwealth of Australia, the Fifty-Pound note has the highest number issued with a total of 608,000 notes. First issued in 1914, the Fifty-Pound Note had considerable purchasing power. Especially as it represented nearly half a year’s salary for a note sorter, employed by the Treasury at the King’s Warehouse in Flinders Street, Melbourne.

The banknote is printed in blue intaglio; at the top centre an oval contains the Australian coat of arms with serial numbers below it on each side. In the upper centre are the words The COMMONWEALTH OF AUSTRALIA and below the words AUSTRALIAN NOTE

The centre of the note has the paragraph, ” The Treasurer of the Commonwealth of Australia Promises to pay the Bearer FIFTY POUNDS in gold coin on Demand at the Commonwealth Treasury at the Seat of Government.” The border has the numeral 50 appearing at each corner of the note. The word FIFTY is the main feature of the background of the note, which is printed in two-letterpress. The Back of the note is printed in blue intaglio and has an ornate border with the number 50 at each side of the main vignette. This picture is of a flock of sheep at Bungaree in South Australia and is the same picture as that on the back of the thousand pound notes. At the James Richard Collins -Assistant Secretary, and George Thomas Allen – Secretary to the Treasury signed the first Fifty-pound notes issued in June 1914.The serial numbers are small seriffed with a Y prefix and printed in dark blue. Delivered by the printers on March 27 1914 to the Treasury, only two specimens out of the 83,845 printed with this signature combination are known to have survived. They are cancelled specimens in the collections of the Art Gallery of South Australia Y037585 and the Mitchell library in New South Wales Y 019632.

The second signature combination was of Charles John Cerutty – Assistant Secretary, and James Richard. Collins – Secretary to the Treasury. The notes, which were similar to the first design, had black serial numbers with an Y prefix range from Y083846 to Y176000 and the first delivery of notes was made on February 26 1920.

The final issue of Fifty-pound notes was made on June 3 1940 with serial numbers Y379501 to 608000. These notes had medium seriffed serial numbers with a bold Y prefix with the same signatures – C. J. Cerutty and J. R. Collins. Both the Fifty and Hundred pound notes of the first design continued to be issued until the announcement on May 31 1945 that all notes over the value of £10 would no longer be legal tender after August 31 1945. By June 1950 records show that only 1,343 notes remained in circulation. As notes were officially written off if not redeemed within forty years of date of issue there are now officially no notes left in circulation.

An unissued type of £50 note exists. This was prepared in 1939 to increase the supplies of the earlier issue that were already in circulation. However the issue of the high denomination notes ceased in 1945 without the need for the issue of notes of this design. The supplies were therefore destroyed in 1958 except for a few notes that were retained as specimens. The note violet in colour has a vignette of George VI at left. On the right there is a window for the watermark of Captain Cook facing right. The denomination £50 appears in large print at the top right and left corner panels and smaller £50 denominations at bottom left and right. The words COMMONWEALTH OF AUSTRALIA appears at the top centre with the words FIFTY underneath. The legal tender clause “This note is legal tender for FIFTY POUNDS in the Commonwealth and in all the Territories under the control of the Commonwealth”. There is a large £50 as the background print together with a mosaic of the number 50 printed in Letterpress. The signatures in black are those of Hugh Trial Armitage – Governor Commonwealth Bank of Australia and Stuart Gordon McFarlane – Secretary to the Treasury. The serial numbers are prefix letter over 0 and a six-digit serial number. The back of the note, also in violet intaglio has a central panel depicting mining with 5 men. One of them holding the handle of a windlass, another bucket and pickaxe, the third a shovel, another a sledgehammer, and the last a sample of ore. The denomination £50 near the centre right, balances the blank watermark panel and together with ornate geometric designs there are the figures 50 in each corner of the design.

Bottom is the words FIFTY POUNDS, and the background is a series of vertical wavy lines.