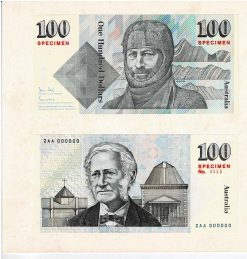 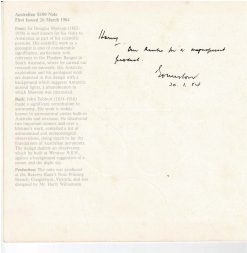 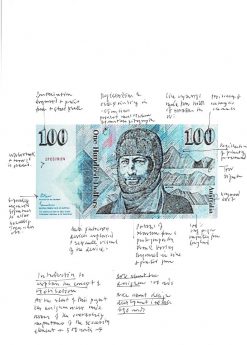 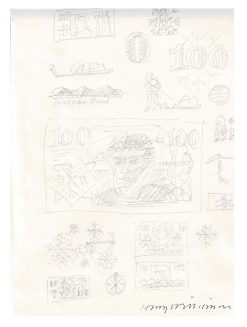 The Right Note is proud to represent Mr Harry Williamson in offering the sale of this Specimen Banknote Set. Mr Williamson was the chief designer of the first hundred dollar banknote produced in Australia. This Specimen Set was presented to him in appreciation of the work he, along with a lot of other people performed, in bringing the banknote from design  into production. We have included some early design drawings.

Front: Sir Douglas Mawson (1882-1958) is well known for his visits to Antarctica as part of his scientific pursuits. His scientific work as a geologist is also of considerable significance, particularly with reference to the Flinders Ranges in South Australia, where he carried out research on minerals. His Antarctic exploration and his geological work are depicted in this design with a background which suggests Antarctic auroral lights, a phenomenon in which Mawson was interested.

Back: John Tebbutt (1834-1916) made a significant contribution to astronomy. His work is widely known in astronomical circles both in Australia and overseas. He discovered two important comets and over a lifetime’s work, compiled a list of astronomical and meteorological observations, doing much to lay the foundations of Australian astronomy. The design depicts an observatory which he built at Windsor N.S.W., against a background suggestive of a comet and the night sky.