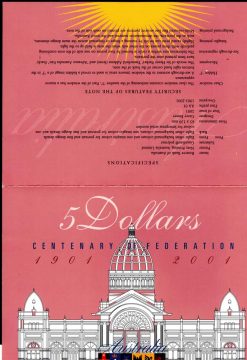 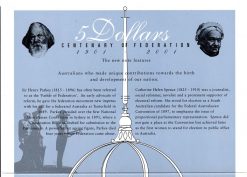 Commemorating the Federation of Australian States which were previously separate British colonies.

This NPA Mint UNC extremely rare limited edition release has come from the first batch of Australian Federation Commemorative Notes (AA01001000-AA01100000) with the unusual signatories of Macfarlane as Governor and Evans as Secretary.

This is the opposite on all previous $5 polymers.

The note has the special rare red centenary overprint ‘1901-2001’ and presentation folder. Only one note in 760 was released like this or less than 0.00135% of the Federation notes issued.

As an added bonus you get a note with an extremely low serial number.