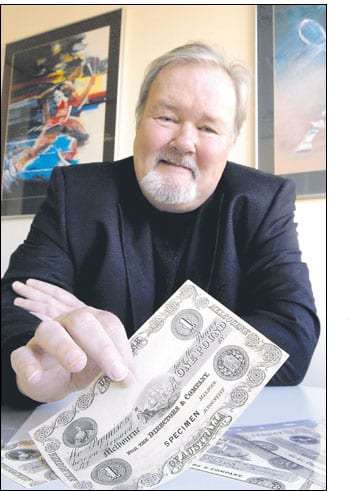 Whoever would have thought the pages of a 50 year old Webster’s Dictionary could contain such a valuable haul.

The family members of a Freshwater man, who died recently, had no idea that sandwiched between the pages may deliver a windfall of up to $200.000.

It was only when tidying the house of the deceased relative that the secret stash, which included a One Pound and Five Pound with the signature combination of Cerutty/Collins-Circa 1918 and a number of Australian pre federation banknotes were discovered.

Freshwaters The Right Note director Mr Richard Fahy, who is representing the dead man’s relatives, said it was an amazing find.

“It’s a great story the way these banknotes were found, he said. “Relatives were getting the amn©s affairs in order and picked up a copy of a large Websters Dictionary. These banknotes literally fell out of the book.

It is likely these banknotes were given to the old man from his father, as he was in his 90©s when he passed away. Meaning the banknotes from 1874 to 1918 were in the possession of only two generations “ever”.

Mr Fahy said the 2 Cerutty/Collins banknotes, and a number of pre federation banknotes will be auctioned in Sydney in September 2008, with expectations of a total auction price of $200.000, this is an approximation only.

Imagine if they’d simply given away the book to charity or thrown it out. It could have ended in a bookshop, or on a tip.

Due to the high grades of most of these banknotes, and their pristine condition, in addition to their age should attract bids of $35000 to $75000 per banknote.

Richard mentioned that Australian banknotes were the number one investment in Australia from 1990 to 1999(the last survey period) courtesy Access Economics 2000, The Money Show Channel 9 Circa 2000.

The world record for the sale of an Australian banknote was set in April 2008, which sold for $A 1.9m.

It could pay you, to check, those old books, this is a favorite spot for storing old banknotes.